Milwaukee league Black Ice Cartel will play host to the long-awaited clash between T-Rex and Danny Myers on March 14. The 17-battle card also features some other strong match-ups including Xcel vs. Born, Lotta Zay vs. Danja Zone and Uno Lavoz vs. Tone Montana. There's a healthy undercard too, with emcees from Wisconsin and beyond. Check out the full flyer below.

Danny Myers has been chasing a battle with T-Rex for a while now, and finally anted up a reported $12,000 himself for the opportunity. The two were supposed to battle in January but the event was pushed until March.

Danny explained why he wanted to battle Rex in a blog last September:

“Okay, so yeah, I been calling out T-Rex for years,” he said. “If y’all been keeping up with my Bars From Mars series on YouTube y’all would know I been calling this man out for years. I call out who I wanna call out, first of all. I respect the fact that he a legend but I feel like I could beat him. What y’all fans can’t do is you can’t look at one guy’s past battles and his history and look at another guy’s past battles and his history and then come up with the conclusion of who would win out of these two if they’ve never battled ‘cause honestly all of that is just conjecture, it’s just guessing. You don’t really know what’s gonna happen when these two finally meet. So everybody like, ‘Oh, Rex gonna kill you. Rex gonna beat you. You finna get 3-0’ed. Danny you crazy.’ He might beat me, so what? That’s the point of us doing it. That’s the point of me wanting to battle him, to prove to myself that I can or cannot beat him. I’m not ever gon’ know that if I don’t battle. It ain’t really about me winning. I just wanna battle the nigga. Why I can’t battle who I wanna battle? If I feel like battling Clips or Lux, whoever I call out, that’s what we here for. That’s what battling is.”

"Battle On Olympus" goes down March 14 at The Astor Hotel in Milwaukee, Wis. 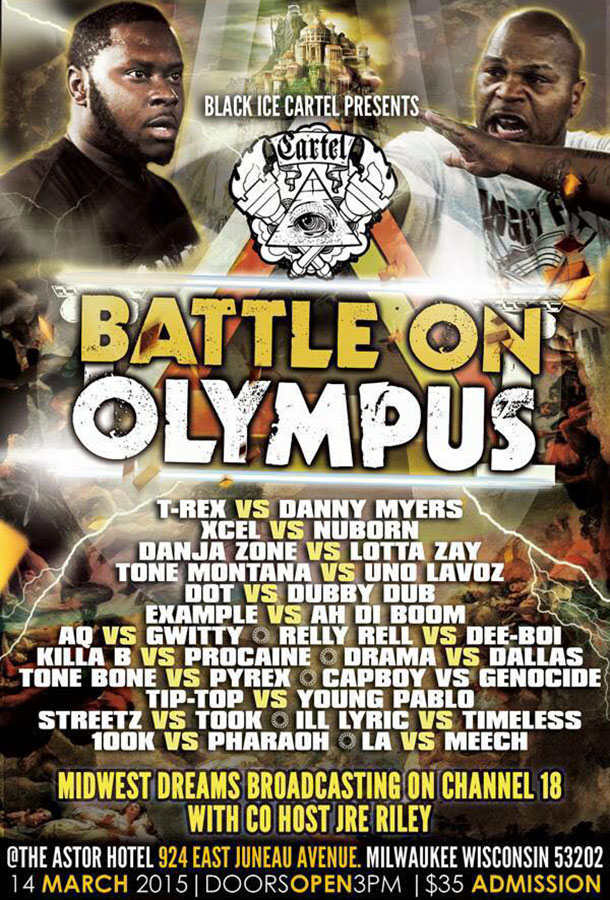 Thoughts on the card? Let us know in the comments below.