BattleRap.com talked with Pnut (f.k.a. Ayem) at BOTB7 about his next moves and history in the industry.

After showing out with top-notch writing and a strong performance on Day 1 of "Battle of the Bay 7," San Jose battler Pnut seems like he's ready to break out onto the main stage (again). Pnut, who has returned to his original rap name after a stint as Ayem, squared off against 2Face at BOTB7 and plenty in the crowd considered it a 3-0 in his favor.

BattleRap.com caught up with Pnut after the event and got his thoughts about his current status in the industry and the next steps in his come-up.

"[It's like] if I'm gonna be the best dude at the Rucker that didn't make it to the NBA, so I'm stuck," he said. "C'mon, man, give me a contract guys. Same concept. I'm just here to try and show people. No matter what name that you use or how many times it changes, of course it kind of hurts the stock. People know when they see me, I'm gonna give it all I got no matter what battle it is. Consistency is my aim. I feel like I accomplish that whenever I get on the stage."

"There's something about it. There's only so many times you can be a spectator on the [main] stage before you crave to be on that," he said. "These crowds are cool but when you get the crowds that are five times the size, that's a beautiful thing. A lot of people strive for that ... Baby steps, that's what we doing." 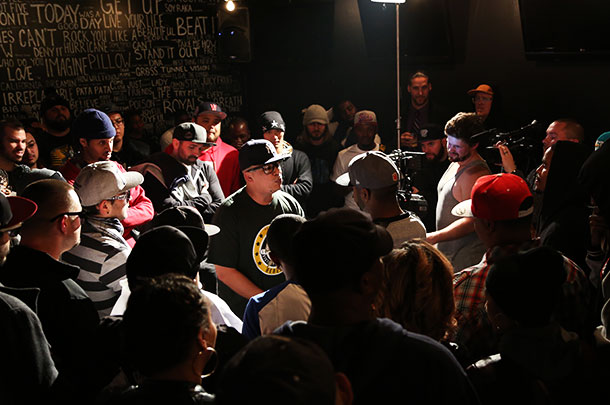 Photo by AK for BattleRap.com.

With that in mind, Pnut's on-camera battle rap resume dates all the way back to 2005. Take a look below at some of the battles that have helped him build up his current name and keep an eye out for his next steps throughout 2015.

Ayem Vs. The Deadman

This might be Pnut's best battle to date and is no doubt his biggest sleeper. The KOTD match-up between Ayem and Deadman took place at "Resurgence" and has since clocked just over 37,000 views. Start here to see what Pnut is capable of.

There were fewer than 300 people in the crowd at this GZ event in Vancouver last summer and the view count for this particular battle is currently sitting at just under 6,000.

BattleRap.com spoke with Pigsty about the match-up and Pnut's performance last year: "That’s sort of the angle I took going into it too – how long he’s been around but how little known he is," Pigsty said of his opponent's reputation. "But he’s awesome. The dude was crazy. He beat me the first round for sure. And I remember that moment where I was thinking ‘Oh shit, I’ve gotta step it up.’"

Back before he changed his name to Ayem (and then changed it back), Pnut got a chance at DNA. This Grind Time Now battle is Nut's most viewed match-up but it's also more than five years old. The video quality isn't great and both rappers have come a long way, but it's a good milestone to gauge Pnut's progress so far.

Pnut & Lush One vs. Passwurdz & Franco

Here's a small slice of West Coast battle rap history as Pnut teams up with Lush One to take on Passwurdz (now known just as Pass) and Franco in the semi-finals of the 2005 "Mind Games" tournament in Menlo Park, Calif.

Do you think Pnut is ready for the main stage? Let us know in the comments and look out for the footage from his latest battle at BOTB7.

Jay Balfour is a Philadelphia based writer and editor. In addition to Battle Rap, he’s written for a variety of websites including HipHopDX, and for print magazines including Bonafide and Applause Africa. You can follow Jay on Twitter at @jbal4_.