King Of The Dot's "Battle Of LA 5" will take place June 28 in Los Angeles, California.

King Of The Dot West Coast has announced "Battle Of LA 5," which is scheduled to take place June 27-28, 2014 at Club Los Globos in Los Angeles, California.

Tickets for the event can be purchased here.

KOTD is set to announce the event card by dropping a series of YouTube videos.

During an interview with HipHopDX last month, Dizaster discussed the status of a potential battle with Math Hoffa. He said that Math was scared to battle in Los Angeles and that he was only willing to schedule a matchup in New York City. 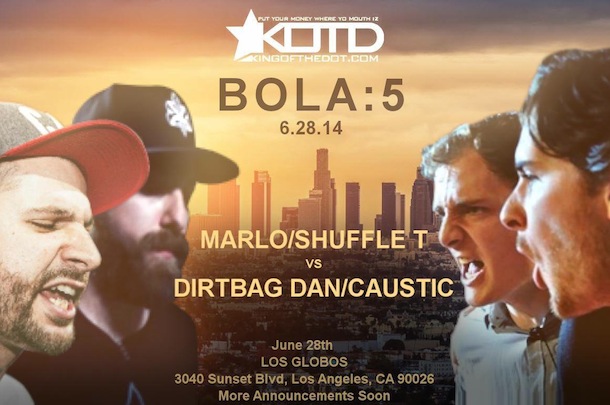 Sparkle Pratt loves all things Hip Hop, got her start in Internet radio, and now pulls double-duty as a Media Assistant at HipHopDX and the Editorial Assistant at Battle Rap. You can follow Sparkle on Twitter at @Sparkle_Lynn.