Charron and Pat Stay speak on their "Blackout 5" title match while Hollohan lashes out at Organik for keeping him off stage.

After months of buildup, "Blackout 5" delivered fully on its promise of unadulterated bars, surprise match-ups, and an epic title match throwdown. What would have likely been the night's biggest moment never came to fruition however as both Pat Stay and Organik separately stopped Charron from including former KOTD title-holder Hollohan in his third round.

As Charron tells it, he had prepped a third round attacking Pat with personals while Hollohan, who was supposed to stand beside Stay during the first half of the battle, made his way over to Charron's side in an epic show of support. Pat somehow heard about the angle in advance though and the stunt was never pulled off, as Pat warned Charron of a possible fight and separately Organik apparently prevented Hollohan from getting on stage. Hollohan has since spoken out against Organik and blames the league co-owner for getting in the way of setting the stage for a possible Hollohan vs. Pat Stay rematch.

Here's Pat and Charron speaking about it backstage ahead of the battle:

BattleRap.com spoke with both battlers after the match-up and got their take on the battle.

Charron Explains His Third Round

When asked to break down his planned third round approach, Charron detailed the lead-up to Hollohan being kept offstage.

In light of the breakdown, he added, "I really did not have a third round. It was very loosely memorized. I was switching bars around so at a few points I almost did choke ... I'm happy I got my stuff out. I wish I could have done more in the third but I was just kind of [shaken] up about the whole thing. Obviously you find out the best bar you have can't be used. Before the battle, I'm like, 'Fuck, I'm not gonna be able to win this.'"

As for his own take on the end result, Charron apologized to his fans and admitted that he lost.

"I took the L but I think if the bars wouldn't have leaked out I would've won with that crazy angle," he said.

After dissuading Charron to pull his third round stunt ahead of their battle, Pat Stay hinted that had Hollohan made his planned appearance the venue would have been shut down due to a brawl.

"Let's just say, I knew some shit," he said of Charron's plan leaking out early. "I'm enough of a stand-up guy to not rebuttal it, to not think of a rebuttal. I knew what was going on. If I was cheap I would have rebuttalled all kinds of shit. It would have been a major problem. A really major problem."

"It would have got cheers, it would have been cool," he said of Charron's plan. "People don't understand, man, I'm gonna say this straight-up: there's battle rap and then there's real life. That shit would have really become real life. I'm not saying anything right now. I'm just gonna leave it that."

When asked about what he told Charron ahead of the battle, a moment now immortalized in an epic pre-battle photo shown above, Pat explained his warning.

"I just said to him, 'Corey, you have to understand, I know that this is all you know, battle rap and stuff like that. But you don't understand doing something like that would cause real problems outside of battle rap,'" he said. "Like real shit. Nothing cool."

Pat, who largely shrugged off his victory, said, "At the end of the day I think they both would have really, really regretted that. Especially Hollohan 'cause we're cool."

While Hollohan never came on stage as planned, he did speak on it after the event and lashed out at Organik for disallowing him to participate.

Check out his reactions on social media below:

Why the fuck would organik do that. Unbelievable

Organik just told me right to my face im not even allowed on stage at all. Grabbed his leg from crowd. Fucking ridiculous.

I love pat and charron my boy too. Guess we see what happens

I love @patstay and were brothers. Battle rap is battle rap. If there was a chance of hollohan vs pat stay 2nd @OrganikHipHop just ruined it

People try to confuse battle rap with real life too much. Pussy shit

Charron winning or losing is irrelevant. Thought the world would maybe want to see a pat vs hollohan 2 and make some new lead up shit too it

Oh dont get me wrong. Im extremely happy for pat to kill shit the way he did. If some antic was gonna go down to setup pat vs me 2. Charron,

Still clearly was gonna lose cuz pat went fucking insane. But to just not let me and pat 2 happen over rumors is silly. Either way. Over now 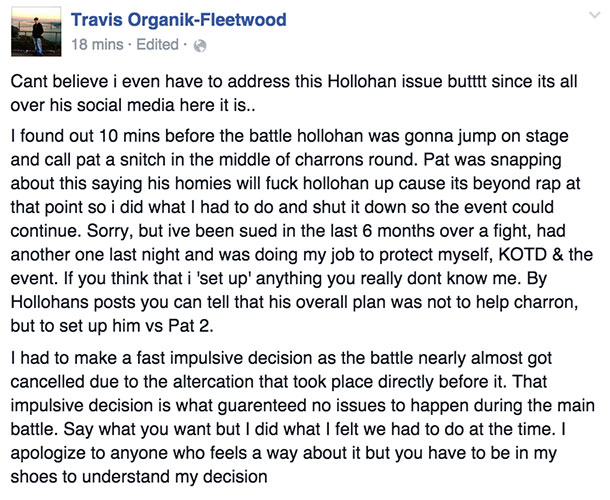 Despite Charron's undelivered third round tactic, was this the best KOTD title match ever? Let us know what you think in the comment section.

Jay Balfour is a Philadelphia based writer and editor. In addition to Battle Rap, he’s written for a variety of websites including HipHopDX, and for print magazines including Bonafide and Applause Africa. You can follow Jay on Twitter at @jbal4_.