RECAP: The winners and losers from Friday night's event.

Snoop Dogg’s “Gladiator School” went down in Atlanta last night, featuring some top tier emcees showing why they deserve that distinction. It wasn’t necessarily a night of classic battles, but more of a talent showcase with some mean performances.

Murda Mook and Snoop effectively held down the hosting duties for the night, introducing battles and bantering between them. Snoop even passed blunts out to the crowd at one point. 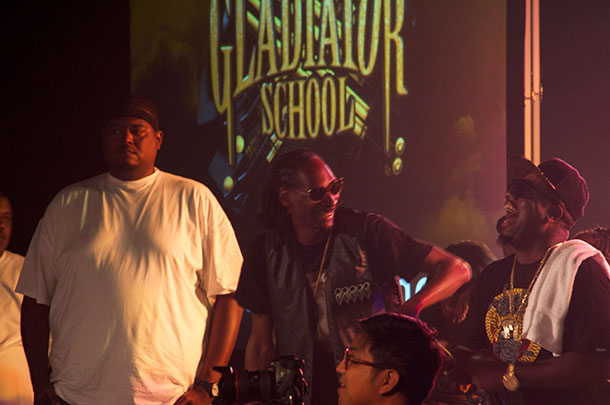 The crowd was relatively small for an event of this caliber — around 300 people, half of them VIPs — and it seemed to be a lot of fans already familiar with most of the names on the card. The marketing leading up to the event was fairly low-key, which ended up working in its favor since it’s easier to surpass low expectations than live up to high ones.

BattleRap.com was in the building and got a ton of interviews (including ones with Murda Mook and Arsonal that are up now) so subscribe on YouTube to catch those first.

Also if you've been sleeping on this event and need to catch up, check out our full preview, or all our coverage from initial announcement to post-event interviews.

Battle of the night 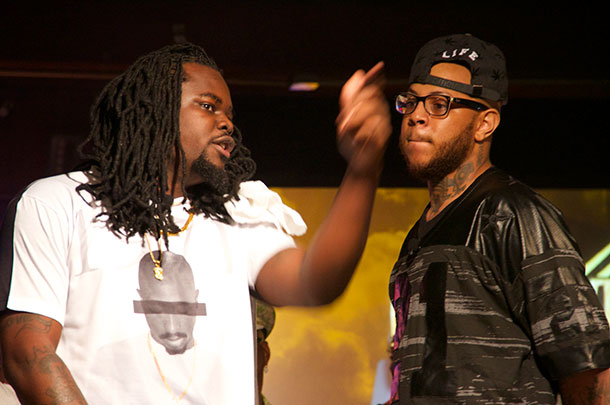 The last battle of the night, between Arsonal and John John Da Don, was the definite standout. The battle itself was competitive but it was also only one of two full three-round battles of the night.

Like at Total Slaughter, Arsonal showed himself to be a higher pedigree than almost everyone else who hit the stage. His performance was laser-focused and his writing has improved noticeably (ie. not one mention of Squidward or his clarinet … though there may have been a Pokemon reference in there).

By no means did John John get bodied, but he did clearly lose. Ars had all the momentum from the jump so it was a steep uphill climb for John John, and even with a steady performance and a bunch of dope bars he couldn’t get his hometown crowd on his side.

Performances of the night 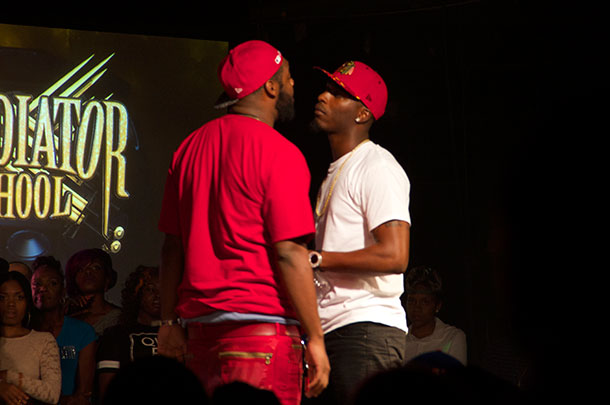 The Detroit native’s performance was the one everyone was talking about at the end of the night. The battle against Hitman Holla was one round with no time limit and Cal put on a clinic that matched what he did to Surf at High Stakes.

The highlight was a well-delivered concept that contrasted Calicoe’s authentic street cred with Hitman Holla’s alleged Hollywood artificiality. That Hitman had a camera crew following him around at times filming for Nelly’s upcoming BET reality show didn’t help to shake the characterization.

Young B The Future 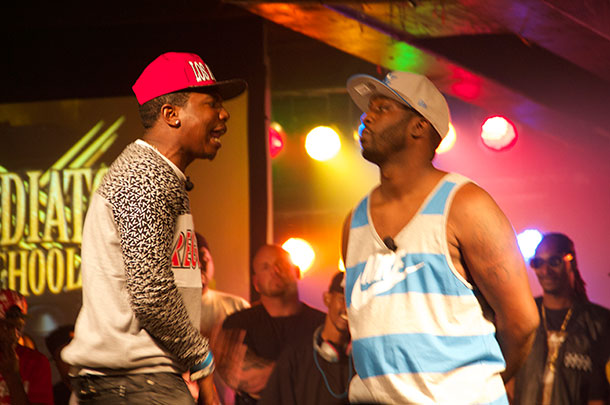 Young B vs. B Magic.

Moreno Valley’s Young B had the most to gain from this event and he took full advantage. He was by far the least known rapper on the card, to the point where all anyone could say when he took the stage was: “Who?”

He showed off his versatility against B Magic, matching aggressiveness with humor, charisma and blatant disrespect for his opponent, Nelly, Jaz The Rapper and pretty much everyone else. His line about Nelly being a sucker from St. Louis who covers beatings with Band-Aids got a huge reception. Nelly even hammed it up, jumping on stage during the frenzy.

B Magic’s intricate flow and punch-heavy style tend to play better on camera anyways, so we’ll see if this one looks closer in the footage.

Young B made a name for himself with this performance. We’ll have to wait and see if it’s as “The new star who launched his career after bodying B Magic” or “that goofy dude the crowd was gassing.” 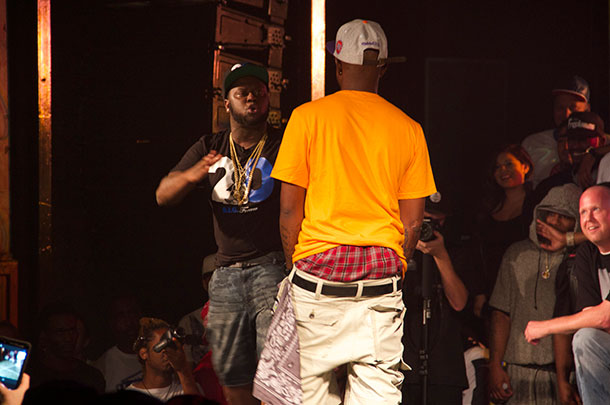 Rex went second in his two-round battle against Rum Nitty and had already won the battle about 45 seconds into his first round. This was the same Rex we saw decimate competition on his way to the Total Slaughter finals, if not better since he had more room to let the bars breath and a bigger audience to cheer for them. Nitty’s bars weren’t hitting with the crowd and Rex’s projection was just too much for him. 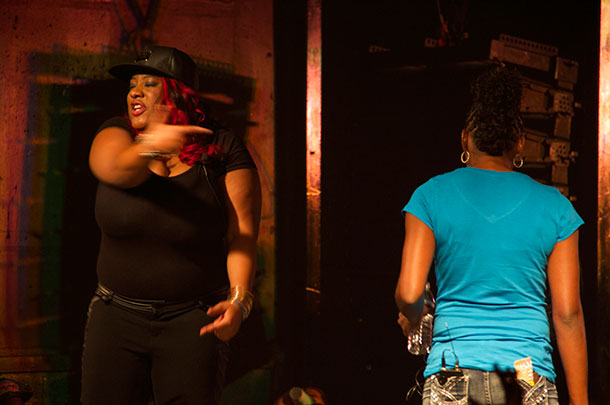 The rapper from New Orleans was the definite standout among the female battlers, taking the win over E Hart, who was no slouch herself.

Lines of the night

"I gotta gun so big I had to lose weight just to use it." - Chayna Ashley

We missed the setup on that one, but the punchline got one of the biggest reactions of the night and had Snoop and Mook quoting it between battles.

T-Rex also had a wild concept about Nitty being a Crip and shooting him until he bled all the Crip out that ended with “I don’t care if you Crip or Blood. You’ll be one bloody Crip or a crippled Blood.”

Rebuttal of the night 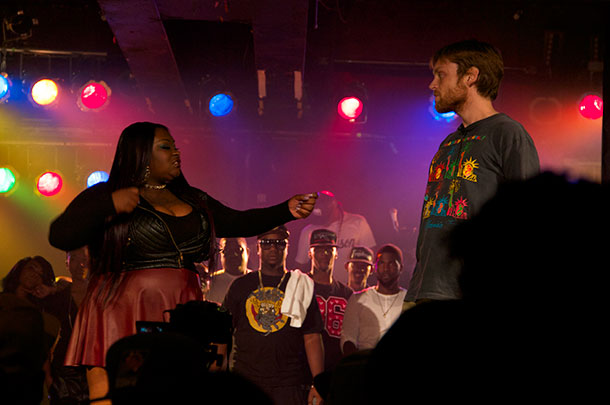 There weren’t many notable freestyles or flips, except for one, which was a corker.

Carter Deems — participating in the warm-up freestyle tournament against female emcee Morawsha — was facing an audience that had never heard of his good-natured, cat-loving persona. The crowd reactions ranged from amusement to hostility, and at one point a woman yelled “Get this cracker off the stage!” Carter paused, turned to her, then replied: “Wanna hang out later?” 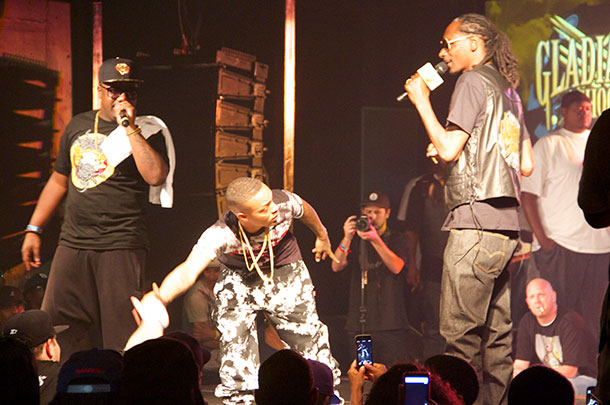 -Star power was out in full effect. Among the big names in the building: Nelly, Bow Wow, Alchemist, King Los, Don “Magic” Juan and probably about two dozen others of similar stature.

-The battle between Daylyt and Tsu Surf, which had been filmed a few weeks ago in front of a green screen, was aired for the crowd. It was a full-on animated visual experience that brought to life the bars the rappers were spitting. It teetered on Uncanny Valley territory at some points, but they said this was just a rough draft so we’ll see how the final product looks. 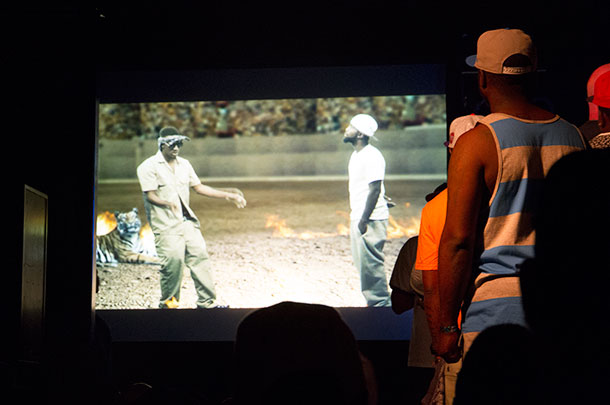 -Every battle on the card happened and the pacing was perfect. It never felt rushed or as if there was too much downtime between battles.

-Arsonal and John John both did the Schmoney Dance at separate times during their battle.

-The arrival of the Atlanta battle scene. The city has always had talent, but was without any major platforms on which to show it off. This event, along with MC WAR’s “New World Order II” on Sept. 28 and Don’t Flop USA’s inaugural event on Nov. 1, should solidify the city’s spot as a growing battle rap hub.

-King Los freestyled expertly under a staircase after the event while T-Rex tossed out words for him to rhyme. Don’t worry, we got it on cam.

-Rum Nitty, B Magic and Hitman Holla underwhelmed. Nitty and Magic through a combination of weak projection and overly complex content, whereas Hitman just came light.

-The crowd talked a lot during the warm-up battles and a few of the female performers didn’t get the credit they deserved.

-It seemed like everyone had a line about either Ray Rice, Solange, the Ice Bucket Challenge or Mike Brown. There’s nothing wrong with topical references, but if you’re going to use one, be damn well sure that it’s more creative than everyone else’s.

It was a no-bullshit night of fun. The vibes were friendly, the crowd was patient and the battles either left us wanting more or finished before anyone had time to complain.

We’re looking forward to seeing what they’ve got in store next.