Finally, we've arrived at the end of KOTD's "Blackout 5" announcements.

Which means we can finally take stock of what it all means and how things fit into the league's historical context.

First of all, the card is stacked. The Blackout series has always been KOTD's marquee winter event, trying to book the biggest available matches for the Toronto crowd. Last year's edition looked phenomenal on paper, but was plagued by six no-shows and a leaked card that ruined the league's first attempt at "mystery" match-ups. The year before that Drake showed up, which was cool, but the event was too big for its own good and the 1,400-strong crowd had a hard time seeing or hearing what was going on, especially during the ill-fated title match between Dizaster and Arcane that set off the whole Bargate scandal.

The first Blackout in 2011 was a fine start, featuring Pat Stay vs. Arsonal and the beginning of Bender's title reign with a win over Arcane, but the undercard was a bunch of names many fans would barely recognize today. (Apologies to any Nebula or Spook One fans out there...).

Blackout 2, however, remains among the best events KOTD has ever thrown, in any division. Cortez vs. Hollohan, 24/7 vs. Osa, Pat Stay vs. The Saurus and Kid Twist vs. Knamelis are all certified KOTD classics that are still brought up three years later and special guest Raekwon's reaction game was super on point. 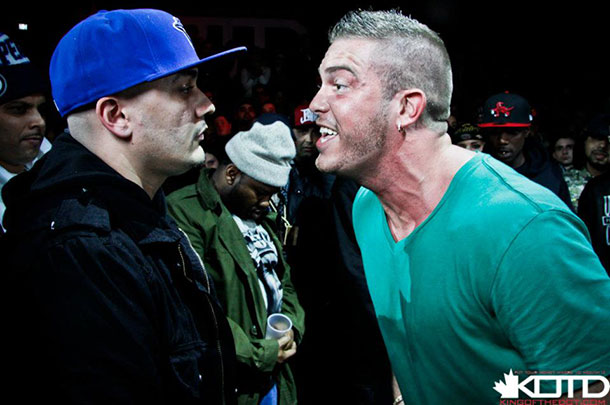 Hollohan vs. Cortez. Photo by Tanya O for King Of The Dot.

But Blackout 5 could outshine all of that. The roster has significant talent on deck and many of the emcees involved bring the "wow" factor with them. Obviously, not every fan is going to like every announcement, but everyone should find at least a few to get excited about, regardless of what style of battle rap they prefer. This variety of genres and personalities is the backbone of what KOTD does best and what made Don't Flop's recent "Sixth Birthday Weekend" and Grind Time's legendary "Battle Of The Bay 5" such successes.

Of the 32 emcees announced for the card, 10 are Canadian, 18 are American (four from the West Coast, nine from the East Coast, four from the Mid-West and one from Florida), three are from England and Soul is Scottish. The event features eight Toronto debuts (five of which are league debuts), and seven emcees that could be considered "returning" after lengthy hiatuses from the scene. That number jumps considerably if you count emcees who are returning to KOTD, rather than to battle rap itself.

Impressively, KOTD has largely booked rappers who haven't oversaturated themselves with too many performances in the last 12 months, or at least mostly with ones who managed to keep their stock high despite their busy schedules.

There's also Pat Stay vs. Charron for the title match, but we'll break that one down in a separate article that's coming soon.

But the best part of the mystery card is trying to solve it. We now have all of the puzzle pieces; we just need to put them together. It's easy at the beginning, but then all of a sudden you're left with three or four match-ups that make no sense and you're back to square one. Grouping 30 emcees into 15 pairs , which is enough to keep battle fans debating straight through until the event starts.

THIRD UPDATE: This article marks the last time I will attempt math in battle rap. Far too complicated.

A note: BattleRap.com often hears advance information concerning match-ups, so let me clarify now, I don't know *any* of the match-ups on this card for sure. In fact, I've actively avoided any possible spoilers because it's way more fun to be in the dark. My predictions below are just educated guesses and I expect many (if not most) will be proven incorrect come February 7-8 since as soon as one is proven wrong, the rest will fall apart very quickly.

I also encourage you to leave your predictions in the comment section below so we can see whose are the most accurate after the event.

Anyway, here are mine:

Fire card or nah? Post your own predictions below too.