BattleRap.com looks back on the hottest battles from the Toronto-based league.

King Of The Dot held on to its place in the battle rap spotlight in 2014, through a combination of constant promotion, regular events across four divisions, occasional scandals, high-quality production and some incredible battles.

The themes apparent in the list below are that the best battlers often make the best battles when paired together, and that a mid-sized room is ideal for creating a classic (the Los Globos venue in Los Angeles hosted seven of ten battles on this list).

If you haven't been following already, BattleRap.com has been recapping 2014 all month. See the rest of the content here.

But here are the battles, in no particular order:

Who: Daylyt (Los Angeles, Calif.) vs. Chilla Jones (Boston, Mass.)
Where: "Vendetta 2: Redemption" at Los Globos in Los Angeles, Calif.
When: April 19, 2014
Why you should watch it: The battle was phenomenal in the building, but gets better and better with every watch. Day spends most of his first round on a Mortal Kombat scheme that references a ton of characters and their special moves. After each line he pauses and asks: “Mmk? Mmk?” referencing the initials of the game. It's broken down perfectly here:

The battle itself isn't particularly tense and is more of a writing exhibition that feels more collaborative than combative. Not that that’s a bad thing here since both guys are among the top writers in the scene.

Day’s unique free-associative writing style is in top form as he drops references to Bangs’ “Take U To Da Movies” and Michael Jackson dangling his son over a hotel balcony. He uses an obligatory “da feet/defeat” bar — easily the tenth one he’s used — probably just to prove that he can still breathe life into them. He also spits what many were calling the line of the night, and perhaps, year:

“You’ll get the open hand, the fist, or the deuce … Rock, Paper, Scissors.”

After he delivers it, the whole building screwfaces for like 30 seconds straight.

Chilla’s content was on par with lots of well-crafted schemes, punches, wordplay and nameflips. He definitely upped his performance energy in 2014 and save for a stumble coming out of the gate here he is clean and concise.

Who: Charlie Clips (Harlem, N.Y.) vs. Daylyt (Los Angeles, Calif.)
Where: "Battle Of L.A. 5" at Los Globos in Los Angeles, Calif.
When: June 28, 2014
Why you should watch it: This battle, between arguably the two top guys in the scene at the time, hit the million-view club after about five months. In it, Daylyt brings his most subtle antic yet. He moved through the venue wearing a hat, a hoodie and sunglasses, taking pictures with fans, answering interview questions for the media and battling Charlie Clips with hundreds of people watching him. Somehow no one noticed that his Spawn mask face tattoo was gone.

Clips’ third round concept going in on Daylyt’s alter ego was pure gold too. That Daylyt was acting as a hype man from the sidelines, yelling “Fight back ski mask!” makes it even more fun.

Who: Sketch Menace (Calgary, Canada) vs. Soul (Dunfermline, Scotland)
Where: "Blackout 4" at The Opera House in Toronto, Canada
When: Jan. 25, 2014
Why you should watch it: Most battle heads already know that Soul is a beast. He delivered another great performance at BO4, just as expected. His versatility was on display, including a hilarious breakdown of Sketch's Calgary division (“Matt Daley is your top tier and he walked out … of his own battle.”).

What people didn’t expect was a stellar performance from Sketch Menace, one that’s arguably the best of his career. Before this battle – which was the clear standout from the event – Sketch was the much-maligned piñata for die-hard fans and critics. He proves them all wrong here. He takes a number of clever angles on Soul, explaining how Soul’s literary references actually come from the TV shows/movies they were made into. (Soul does make Game of Thrones and J.D. Salinger references in his bars here too.)

Both guys are funny and bring creative angles, combining topical references with direct attacks. You can tell that both of them, along with everyone on stage, are really enjoying themselves.

This battle is also notable as the final chapter in the Don't Flop vs. KOTD trilogy that started with Eurgh calling out Organik and then continued with Knamelis calling out Eurgh against Mark Grist.

Who: Dizaster (Los Angeles, Calif.) vs. Math Hoffa (Brooklyn, N.Y.)
Where: "Battle Of L.A. 5" at Los Globos in Los Angeles, Calif.
When: June 28, 2014
Why you should watch it: Forget the punch. Forget the months of ongoing threats. Forget the lawsuit and diss track and "celebrity boxing" offer. Everything that happened before the brawl at the end of this match-up was battle rap at its finest. Both competitors brought their best performance in ages and the crowd was riding with them equally. That this video ends with a Sopranos-style hard-cut-to-black seems appropriate in that it freezes in time a universe where all the extra-ness didn't actually happen.

Who: Pat Stay (Dartmouth, Canada) vs. Rone (Philadelphia, Pa.)
Where: Hopscotch Festival in Halifax, Nova Scotia, Canada
When: Sept. 27, 2014
Why you should watch it: This battle wasn't technically from KOTD, but it dropped on their channel so it's fair game. It's one of the oddest battles from 2014. KOTD Champion Pat Stay takes on Rone in front of a festival crowd of thousands, where they spend three full rounds declaring their "bromosexual" love for each other.

If you're still interested after that description, there's good news: this battle includes some of the sharpest writing and funniest moments of 2014. Someone in the crowd throws a mackerel on stage for God's sake.

Bigg K vs. The Saurus

Who: Bigg K (Norfolk, Va.) vs. The Saurus (Las Vegas, Nev.)
Where: "Vendetta 2: Redemption" at Los Globos in Los Angeles, Calif.
When: April 19, 2014
Why you should watch it: Anyone who thought this battle was going to be a repeat of Bigg K’s “Best Battle of 2013” match-up against Illmaculate was half right. K lived up to his dominant KOTD debut and solidified his position among the current greats.

He has haymaker after haymaker that shuts the venue down three or four times and his presence sells every line. There's no trace of the “Fuck battle rap. Shit’s corny” attitude from his Illmaculate battle and it actually seems like he's enjoying himself. He even freestyles to start his first and had rebuttals in his last two rounds.

The Saurus put up a good fight and definitely had enough moments (“I’m about to put up my Dukes and Coach K“) to keep it interesting but as he said after: “When K is spitting it feels like you’re getting punched in the chest.”

The battle was a welcome change of tone to much of battle rap in 2014. Both guys were direct, saying exactly what they thought about their opponent rather than using words that sound like other words to get their point across.

Rum Nitty vs. B Magic

Who: Rum Nitty (Phoenix, Ariz.) vs. B Magic (St. Louis, Mo.)
Where: "Vendetta 2: Redemption" at Los Globos in Los Angeles, Calif.
When: April 19, 2014
Why you should watch it: Another fantastic battle that lived up to expectations. Magic clearly didn’t slack on his KOTD debut and even with a few stumbles had the crowd riding with him the entire time. Nitty killed it too and the whole thing was the bar-fest that had been predicted, so let’s just get to a few highlights:

“When you get wet with the Calicoe it ain’t skinny dippin” - Magic
“I’ll pull it until he drop. That’s a tug-of-war.” - Magic
“Get close and put this nickel behind your ear. Don’t make me show you, Magic.” - Nitty
“Most niggas got it in for Nitty (infinite). It won’t ever end.” - Nitty
“Lost to the white boy but came back whippin niggas, this shit is in my roots.” - Nitty
“Fuck around and get shot in the face if you think this pump fake.” - Magic

It goes on and on. Check out the full lyrics here.

Who: Real Deal (Pittsburgh, Pa.) vs. Chilla Jones (Boston, Mass.)
Where: "Battle Of L.A. 5" at Los Globos in Los Angeles, Calif.
When: June 28, 2014
Why you should watch it: This one lived up to expectations after almost a year of call-outs between both guys in battles. It was refreshing to see two competitive emcees trying their hardest to outwrite and outperform each other, something which sadly became rarer and rarer throughout 2014.

The battle itself ended up being highly strategic, with each of them predicting each others' angles and pulling momentum to their side each round. Lots of fans have picked their own winners, but the consensus online was that this battle was a draw.

Chilla’s “he’s a racist because he always leaves niggas hanging” high-five approach was classic too.

Who: Marlo and Shuffle-T (U.K.) vs. Dirtbag Dan and Caustic (U.S.)
Where: "Battle Of LA 5" at Los Globos in Los Angeles, Calif.
When: June 28, 2014
Why you should watch it: British rap/comedy duo Marlo and Shuffle-T have had repeated viral success with battles as well as comedy sketches. But the big question going into this match-up was whether their humor and rapid-fire delivery would sway the West Coast crowd. It ended up being the funniest battle of the night, with Dirtbag Dan and Caustic totally delivering on their end too.

In a video released after the event, Dan showed that the cookies he offered the Brits had been alllll up in his underwear so let that be a lesson to never take cookies from strangers (or at the very least, from Dirtbag Dan).

Bigg K vs. B Magic

Who: Bigg K (Norfolk, Va.) vs. B Magic (St. Louis, Mo.)
Where: "Duel In The Desert" at Celebrity Theatre in Phoenix, Ariz.
When: Oct. 4, 2014
Why you should watch it: Again, not technically a KOTD battle, but released on the channel so it counts. Sure, the whole video is only 12 minutes long, but who said rap battles have to be longer than a coffee break? The short runtime actually serves as a great intro the scene, and Bigg K and Magic's style are massively accessible to a new audience. 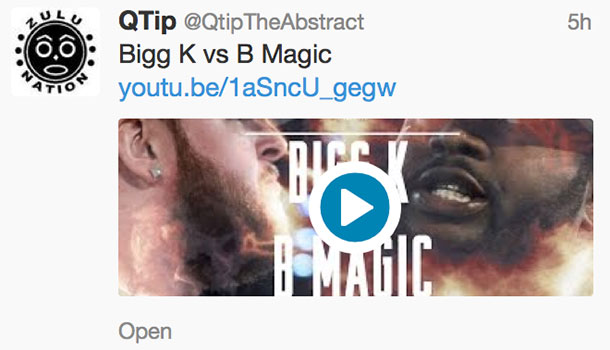 Check out the lyrics to this battle while you watch it here.

A few honorable mentions too:

One of the most epic battles in KOTD history, as two heavyweights clashed on the Toronto stage. Ultimately, Pat was in his element that night. No one could have beaten him, though Dizaster came close. A day later, Dizaster announced his (short-lived) retirement from battling. That’s how much of an impact the loss had on him.

Two of the most slept-on talents in battle rap face off in Calgary. This one happened at the end of 2013, but the footage didn't drop until early January 2014.

A lot of the live updates from "Duel In The Desert" made it seem like Marv trounced Lotta Zay, and while his material connected perfectly with the audience and his third round was fire, the battle itself looks much closer on camera.

For more info on any of the rapper or events, follow the tags at the bottom of this article.

Did we miss any hot battles? Let us know in the comments below.