Controversial Watts rapper Daylyt gets kicked out of the venue mid-battle with his antics at “Duel In The Desert.”

Daylyt’s battle against Real Deal in Phoenix on Saturday, Oct. 4 brought a little more than his typical antics.

As the crowd waited for the battle to begin, rumors circulated that Daylyt was offstage changing into his costume for the night. Soon after, he appeared in an all-black outfit with a full cloak over his head. 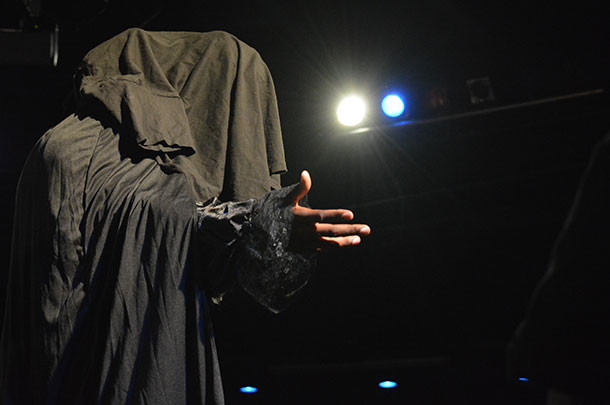 Daylyt went first and had the entire crowd’s attention before even spitting his first bar. He handed out cards to people in the crowd from a deck he’d brought. He said, “Let’s all play a game. Deal or no deal.” He explained that the person who got the “lucky card” would decide whether Daylyt would use bars or antics. The woman who received the lucky card chose bars after strong suggestions from the rest of the crowd. Daylyt replied: “Well, I ain’t got none.”

.@battlerapdotcom the woman in the crowd chose bars. Daylyt says "well I ain't got none." But now is spitting some. pic.twitter.com/XJZvUvd3SP

In Round 2, some fans weren’t feeling Daylyt’s antics, beginning to heckle and demand bars, though many others in the audience were amused.

In the third round, Daylyt told the crowd that fans had expected Real Deal to "take [Day's] head off" and then said that he'd already done it himself. He removed his cloak to reveal a decapitated head (that rolled onto the stage) leaving just his bloodied neck. 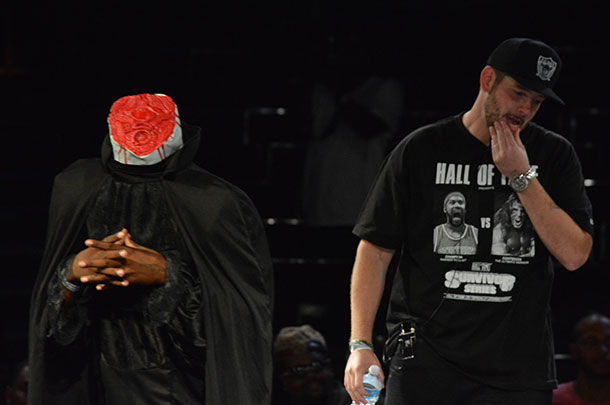 He finally got to some bars, but by this point the crowd had already fully lost their patience with him. As the crowd booed, Daylyt said, “If I hear two more boos, I’ma take a boo boo on stage.”

Daylyt — having received more than two boos — pulled down his pants and squatted into position to defecate. As soon as that happened, all the battlers surrounding him cleared the stage.

"If I hear two more Boos I'm going to take a boo-boo on stage." @DAYLYT2k Then he pulled his pants down and tried. pic.twitter.com/Y2ySiF3MSH

The crowd reacted wildly, realizing he was actually going to do it this time.

This isn’t the first time Daylyt has threatened to defecate on stage. At July’s “Total Slaughter” event in New York, he copped a squat on stage and pretended to eat whatever fell out of his pants.

Before Daylyt released his “boo boo” in Phoenix, two of the venue’s security guards grabbed him, pulled him backstage and then escorted him off the premises, locking him outside a large iron gate.

Which is when we interviewed him:

Real Deal only delivered his first two rounds before Daylyt was kicked out and didn’t get a chance to spit his third.

The venue’s head of security later explained to BattleRap.com that they removed Daylyt because if he’d defecated on stage there would’ve been issues with the Department of Health.

Oh, and we got the head.

Always good to bring a souvenir home from a trip. pic.twitter.com/5pE1ZMAlN1

This battle will be available on pay-per-view soon. Click here to purchase it.

To hear more about the actual battles from the event, check out our recap article.

Jocelyn Valencia is a Southern Arizona native currently based in LA. In addition to BattleRap, she currently writes for HipHopDX and her own blog. Her love for hip hop music and culture keeps growing through her passion of writing. You can follow her on twitter @_JocelynV_