Our preview of the event that features The Saurus, Sketch Menace, Chedda Cheese, Illipsis and the GZ Title Match.

On June 18, King Of The Dot’s Vancouver division will be putting on arguably its strongest card ever, "Gastown 2." Long having been primarily a Ground Zero division, Vancity is looking at throwing bigger events, and this one could be a solid step on that path.

Headlining the card is a match-up of two longtime KOTD regulars: The Saurus and Chedda Cheese. Also featured is Illipsis’ main channel debut and the GZ title match.

The full card is as follows:

The headlining battle pits Two-Time Everything The Saurus against Calgary's Chedda Cheese. Chedda is coming off one of the most fun battles of the year against Carter Deems and is now up against perhaps the biggest test of his career.

For The Saurus, it appears to be a battle that he's looking forward to. He expressed his excitement about the battle on Twitter, writing:

The Saurus vs Chedda Cheese happens in a week & a half. And you're ridiculously excited. Which is understandable. Same.

Second from the top of the flyer is Illipsis, making his main page debut against former KOTD champion Sketch Menace. Illipsis' breakout performance came at "World Domination 5" when his battle against Isaac Knox achieved some measure of viral success. His pen has always been top level, and as his comfort on the stage increases, he's looking like more and more of a threat. 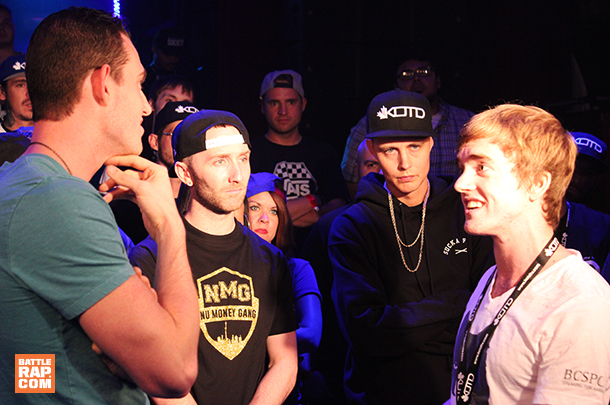 While Illipsis broke out at WD5, Sketch Menace last battled there. After Eurgh pulled out of the event, Sketch battled in a light-hearted affair against Dizaster dressed as Eurgh (dubbed Dizasteurgh). Though many found the battle funny, the circumstances were definitely unorthodox, so this will give Sketch a chance to show what he can do in a more typical setting. Arguably Sketch's best battle was against Soul, who has a writing style similar to Illipsis'.

The battle with the most on the line is DDSS vs. Aftershock. Vancouver's DDSS won the GZ title in 2014, defended it later that year, and aside from a battle with Knamelis in March 2015, has been fairly dormant in the scene. During his time away from battle rap, the league has changed a lot. Gully's scouting trips to Detroit and the inclusion of the Arizona division have signalled positive growth for the league, and the landscape is much more competitive now.

He'll defend the GZ title against Aftershock, a KOTD veteran who has done well on the main stage and immediately made an impact in GZ, winning the Ground Zero Grand Prix in 2015. DDSS will be hoping that the battle goes like his first defense, which was a victory over another KOTD veteran, Porich. Aftershock, on the other hand, is looking to give GZ a champion who is likely to be more active.

BattleRap.com's Chris Mitchell caught up with Aftershock to discuss the battle and the "Gastown 2" event.

The rest of the card mostly features guys from British Columbia and surrounding areas (including fan favorite Lil G, and the always ambitious Copasetic) who will be looking for a performance that will bring them to a wider audience.

Check out the full flyer for details and follow the rapper tags at the bottom of the article for more coverage on any names you want to get to know better.

Thoughts? Predictions? Let us know in the comments below.

Brad is a battle rap fan who lives in Nova Scotia, Canada. He's been a BattleRap.com contributor since August 2015. Follow him on Twitter: @JackDeuce1988.